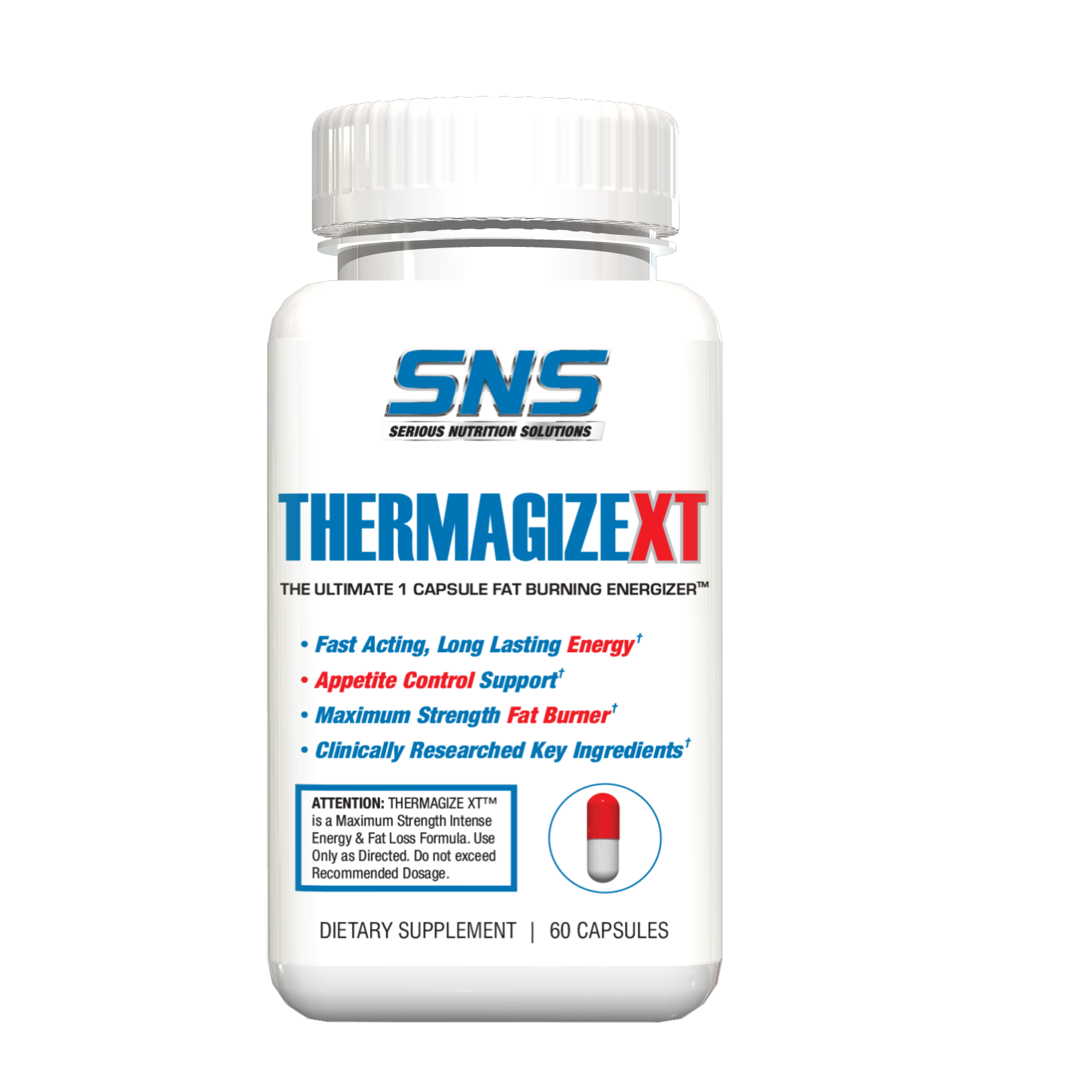 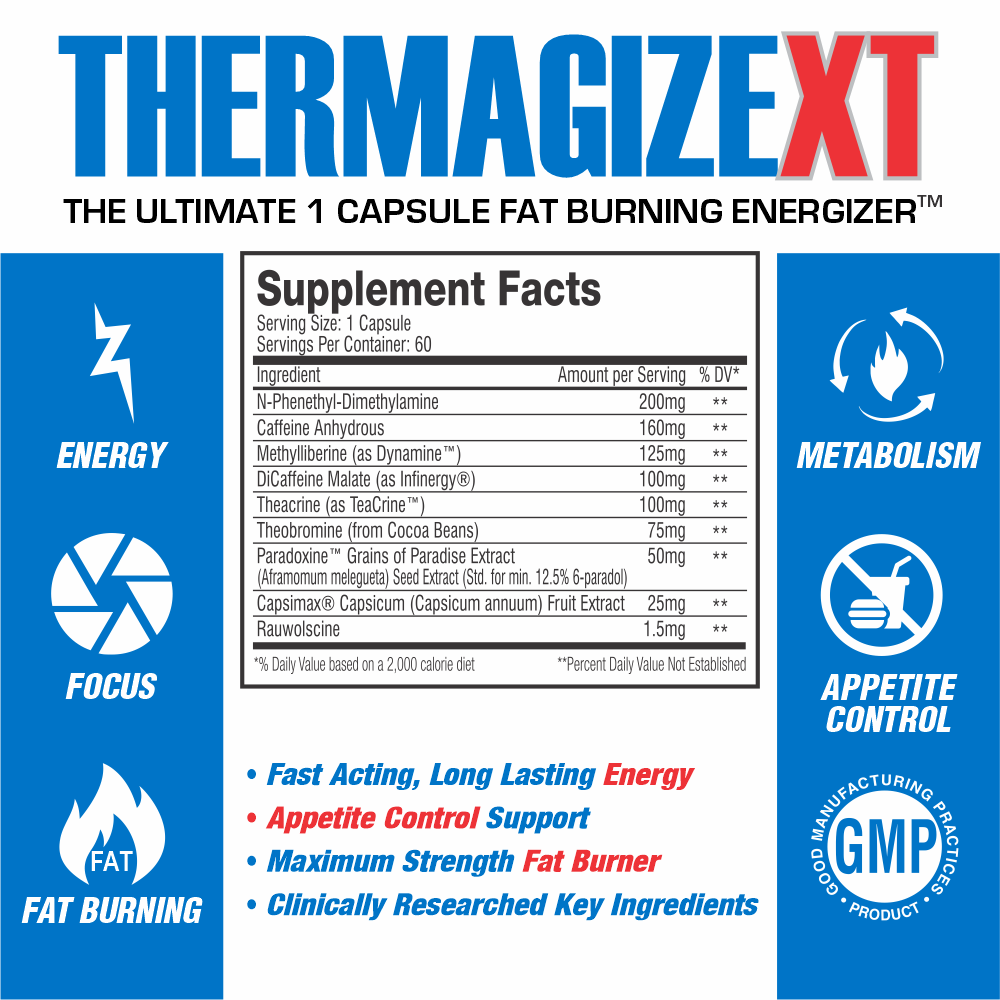 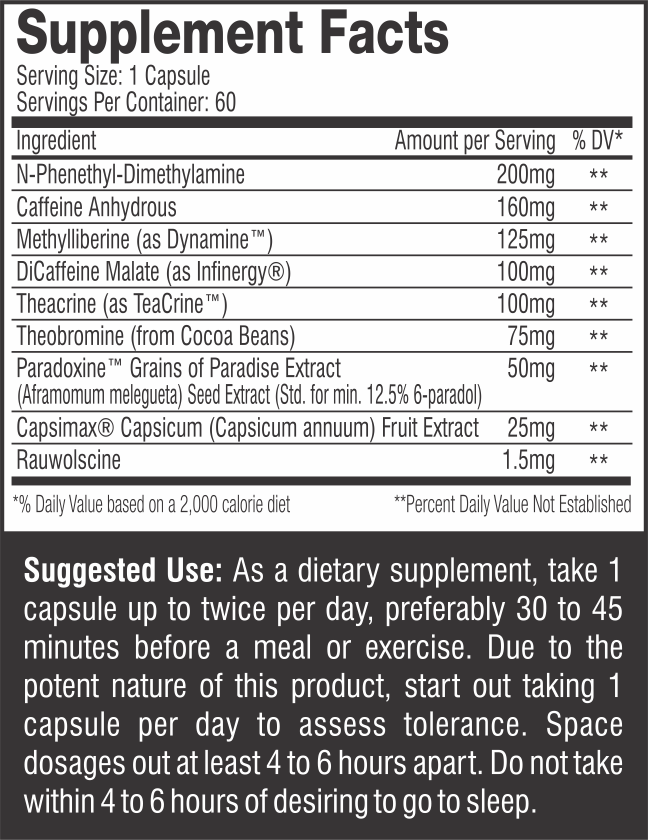 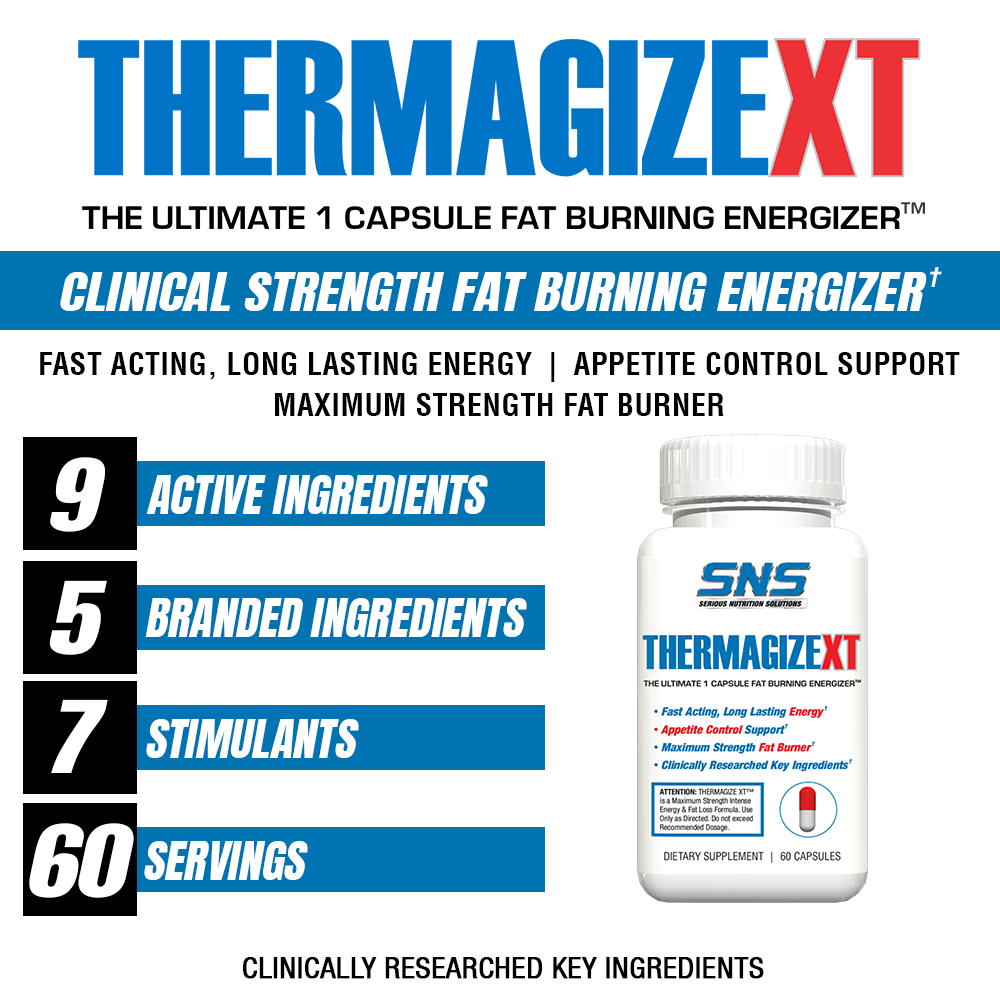 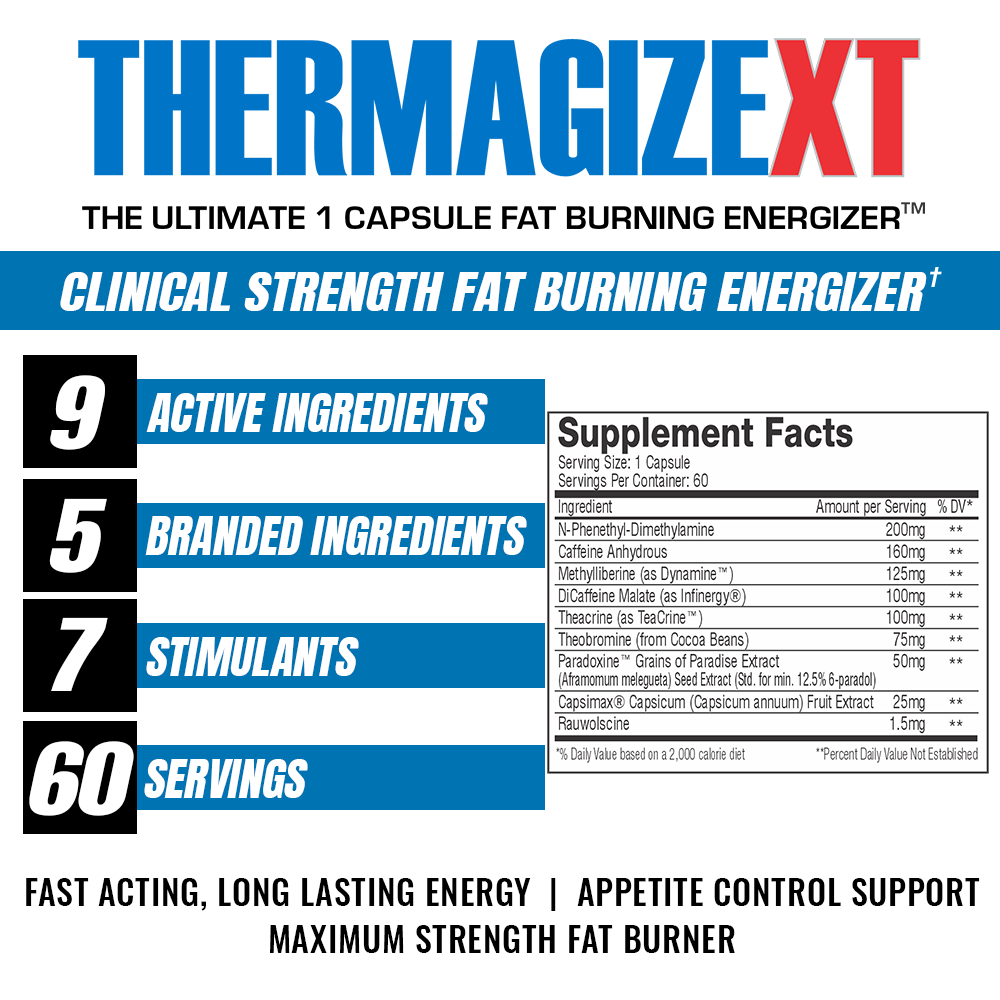 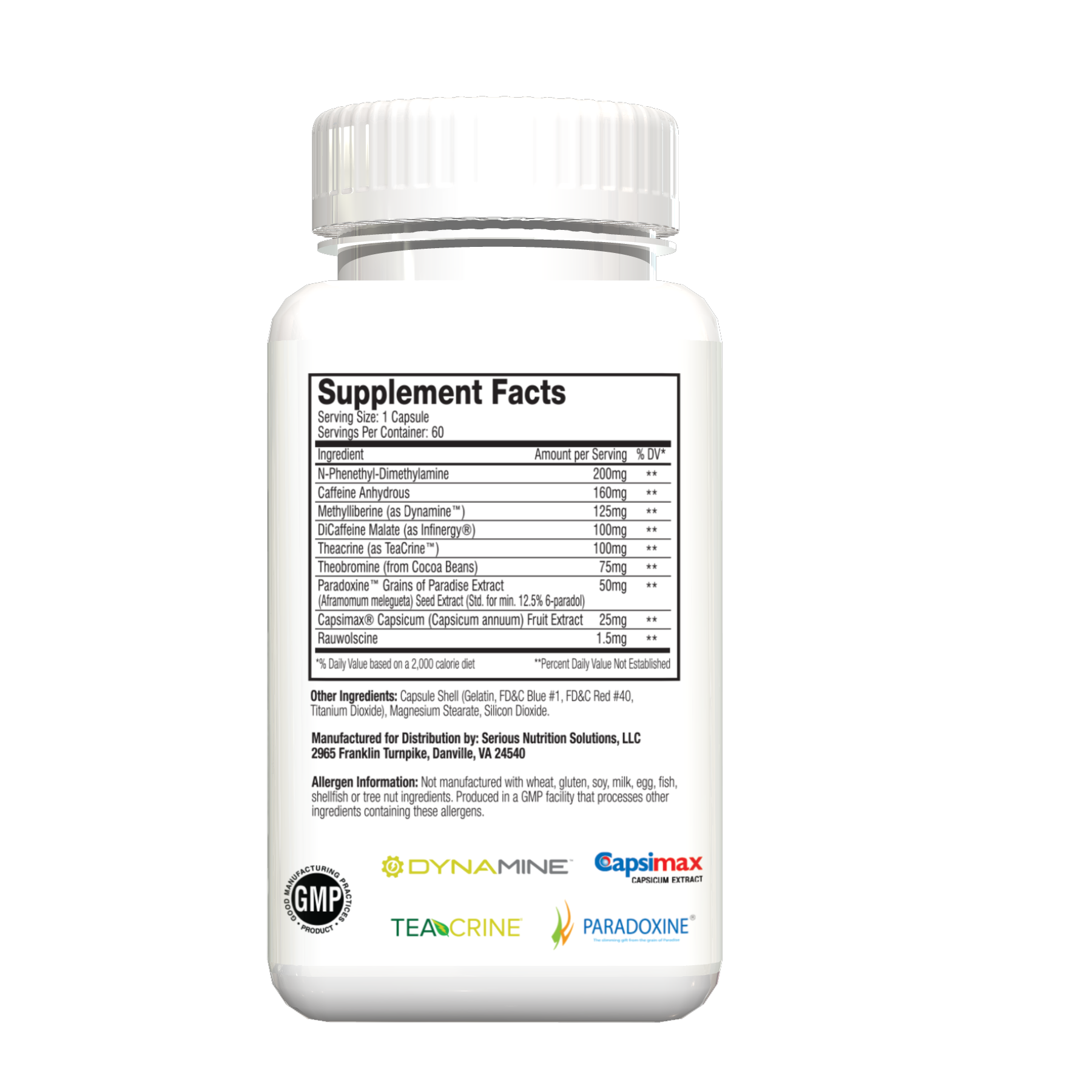 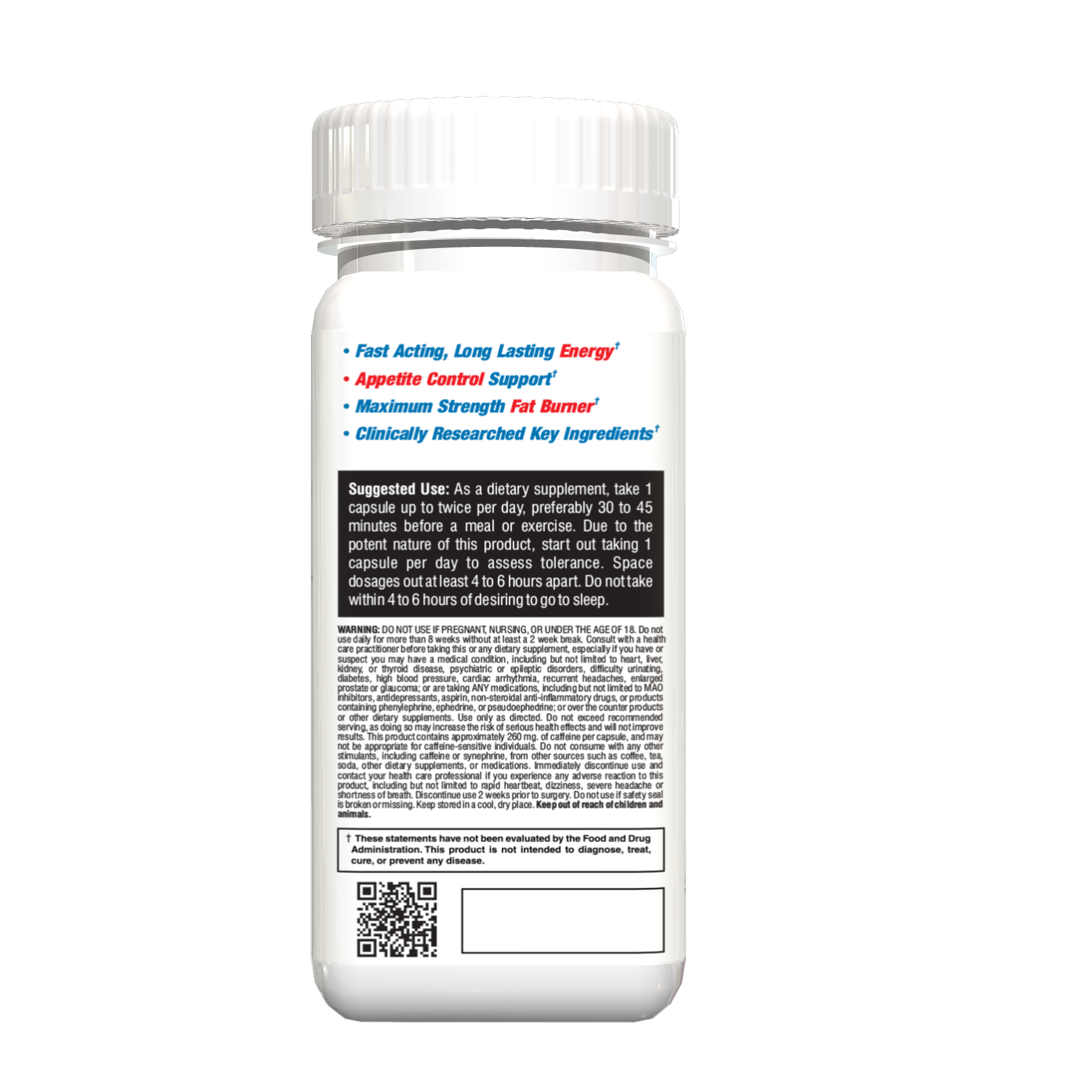 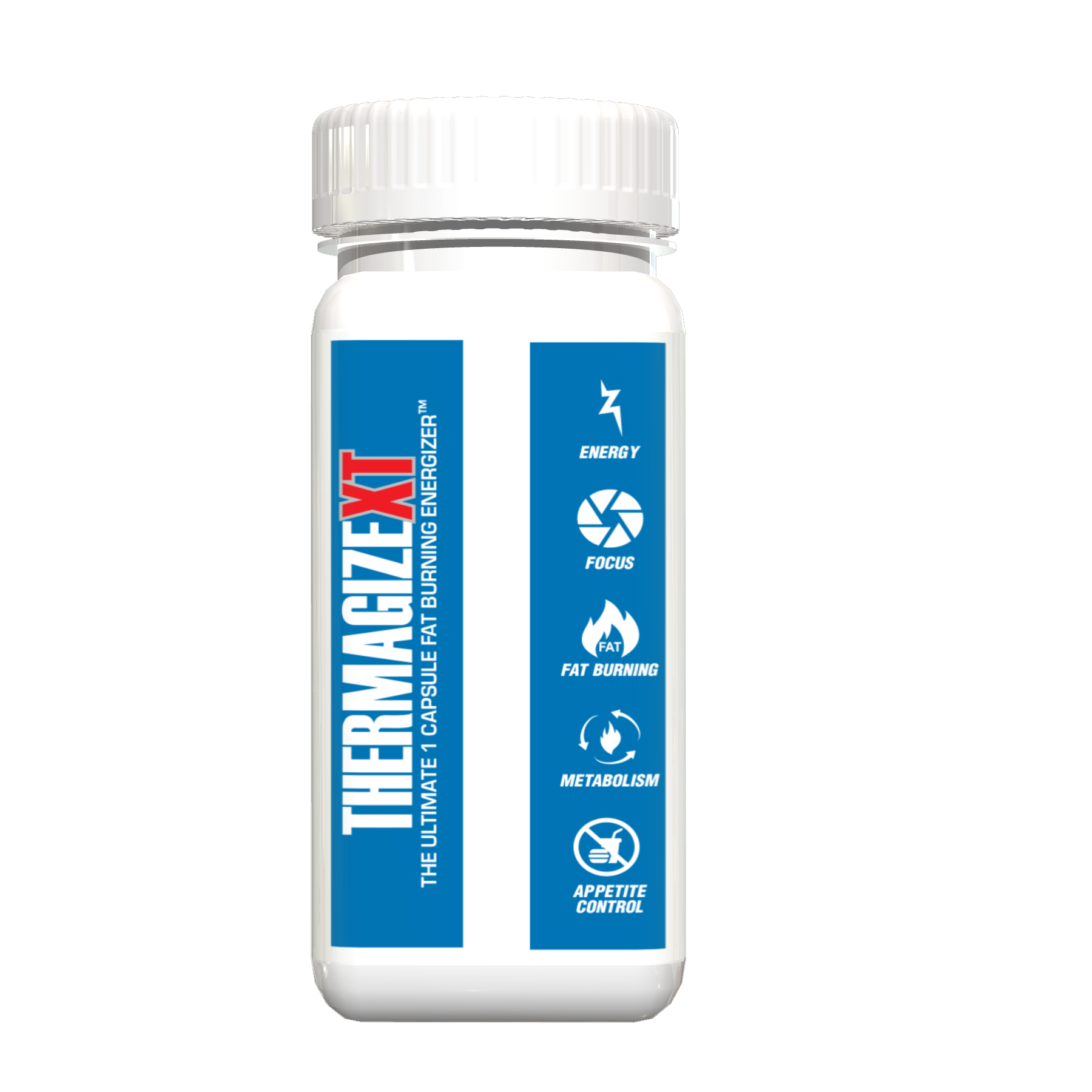 Thermagize XT was designed with one goal in mind – to be the strongest 1 capsule fat loss product and extreme energizer available.

Ask Yourself a Few Questions:

If you answered yes to any of the above questions, Thermagize XT may be right for you.

Can I stack other fat loss products with Thermagize XT?

Thermagize XT is a very comprehensive thermogenic fat burner so it is important that if you are going to stack any other fat loss products with it that you be careful to avoid overlapping or conflicting ingredients. Even though Thermagize XT was designed to be very strong and effective on its own, for those looking to add another cutting edge fat loss product to stack with it can also use SNS Lean Edge – Stimulant Free Fat Burner along with Thermagize XT.

Do I need to cycle Thermagize XT and if so, what can I take when I am off of it?

As with any stimulant based fat loss product, we suggest using for no longer than 8 weeks without a 2 to 4 week break. During this time, Thermagize XT can be cycled with SNS Lean Edge – Stimulant Free Fat Burner.

What do you suggest for getting the best fat loss results from Thermagize XT?

When trying to lose body-fat, most people find that following a proper diet and exercise program, drinking at least 10 glasses of water a day, and avoiding unhealthy snacking will help them reach their goals quicker.

Can I use Thermagize XT for energy even if I am not looking for fat loss?

Absolutely. There are many individuals that are not looking for fat loss that enjoy the intense, long lasting energy that many people experience with Thermagize XT.

N-Phenethyl-Dimethylamine is a very potent stimulant and fat burning ingredient that may offer potential mood-boosting effects through increasing dopamine and noradrenaline in the body. Dopamine is commonly referred to as the ‘feel-good’ hormone. These hormones also support improved concentration, alertness, mental focus, positive mood, and an improved sense of well-being.

In addition to its energy and fat burning benefits, common feedback on this ingredient includes improved mood and focus in the gym, during exercise, &/or in day to day life.

Caffeine Anhydrous is the staple ingredient in many fat loss and energy products and for good reason.

With numerous studies supporting Caffeine’s role in fat loss, most notably through thermogenesis, Caffeine has also been shown to improve exercise performance and has a key role in increasing energy, mental focus, mood, cognitive ability, and has potential synergistic effects with other key ingredients in Thermagize XT.

Dynamine, also known by its technical name methylliberine, is an alkaloid found in the kucha tea leaf. It is chemically similar to caffeine and theacrine and may amplify feelings of energy, mood, and focus by activating dopamine receptors and other neurotransmitters without elevating heart rate and blood pressure.

Dynamine can be thought of as a faster acting version of theacrine and users can see results in as little as 15 to 30 minutes after consumption. Therefore, the combination of Dynamine and theacrine can be viewed as the best of both worlds in terms of achieving both fast acting and long lasting energy, improved mood, focus, mental alertness, cognition, and physical performance.

Infinergy™ DiCaffeine Malate is a form of Caffeine that has been bonded to Malic Acid which can both extend the effects of the caffeine and increase energy production through Malic Acid’s role in the Krebs cycle. By combining the well-established properties of both Caffeine and Malic Acid, Infinergy™ offers a multi-dimensional ingredient that not only optimizes energy levels but also stimulates thermogenesis while promoting mental focus.

Theacrine is a unique supplement that is known for its ability to act as a potent, long lasting stimulant and for its mood enhancing benefits. Typical user feedback on Theacrine commonly includes long lasting energy and alertness, increased activity levels, and mood enhancement.

The mood enhancing benefits of Theacrine are thought to be linked to its ability to elevate dopamine levels in the brain. Dopamine is one of the primary neurotransmitters responsible for controlling pleasure centers in the brain.

Theacrine is chemically similar to caffeine but is very different in that its benefits have been shown to last for a longer period of time and also because there doesn’t seem to be the tolerance build up associated with caffeine.

Another nice note about Theacrine is that in addition to its stimulant properties, it has been shown to have anti-inflammatory and analgesic (pain relieving) properties.

Theobromine is a methylxanthine and is the ‘feel good’ ingredient in chocolate. The relaxed feeling that one experiences after chocolate consumption can be attributed to theobromine.

The energy from theobromine is commonly described as a sustained long lasting relaxed feel good energy without a crash.

Paradoxine® is a standardized extract of the Grains of Paradise seed, also known is Aframomum Melegueta which is a spice native to West Africa that belongs to the same family as ginger. Paradoxine® is ideal for those looking for improved body-composition and enhanced fat loss.

To understand how Paradoxine® works, it requires an understanding of the different types of adipose tissue (fat) in the body:

Unlike many fat loss ingredients, Paradoxine is backed by human studies. One study on Paradoxine in humans showed that subjects who consumed Paradoxine® had a significantly greater increase in energy expenditure, seemingly due to the increase in brown fat activity versus the placebo group. Another study showed that subjects (non-obese women) that consumed Paradoxine had greater decreases in body-fat around the lower abdominals as well as lower levels of visceral fat in the same area as compared to those who consumed a placebo; and very significantly this was with both groups NOT making any changes in diet or exercise.

Rauwolscine is a type of plant alkaloid that acts as a central nervous system stimulant. It has become a very popular ingredient in many weight loss products and supplements because of its potential energy and fat loss benefits.

Rauwolscine is classified as an alpha-2 antagonist; this means that it is thought to help block alpha-2 receptor stimulation which may help the body to release more norepinephrine and prevent the formation of new fat tissues.

Rauwolscine is important for what it is and also because of what it isn’t. Rauwolscine bears a resemblance to Yohimbine, another popular fat loss ingredient, but unlike Yohimbine, Rauwolscine isn’t reported to cause the level of anxiety or panic attacks that some people experience when using Yohimbine.

Rauwolscine is also thought to have aphrodisiac properties in some people.

DO NOT USE IF PREGNANT, NURSING, or UNDER the AGE of 18. Do not use daily for more than 8 weeks without at least a 2 week break. Consult with a health care practitioner before taking this or any dietary supplement, especially if you have or suspect you may have a medical condition, including but not limited to heart, liver, kidney, or thyroid disease, psychiatric or epileptic disorders, difficulty urinating, diabetes, high blood pressure, cardiac arrhythmia, recurrent headaches, enlarged prostate or glaucoma,; or are taking ANY medications, including but not limited to MAO inhibitors, antidepressants, aspirin, non-steroidal anti-inflammatory drugs, or products containing phenylephrine, ephedrine, pseudoephedrine; or over the counter products or other dietary supplements. Use only as directed. Do not exceed recommended serving, as doing so may increase the risk of serious health effects and will not improve results. This product contains approximately 260 mg. of caffeine per capsule and may not be appropriate for caffeine sensitive-individuals. Do not consume with any other stimulants, including caffeine or synephrine, from other sources such as coffee, tea, soda, or other dietary supplements, or medications. Immediately discontinue use and contact your health care professional if you experience any adverse reaction to this product, including but not limited to rapid heartbeat, dizziness, severe headache or shortness of breath. Discontinue use at least 2 weeks prior to surgery. Do not use if safety seal is broken or missing. Keep stored in a cool, dry place. Keep out of reach of children and animals.

Be the first to review “Thermagize XT – 60 caps” Cancel reply